When we look at the contributions of women in Philippine education, we tend to recognize the matriarchs of Benitez family, founding the Philippine Women’s University; or the Doña Librada Avelino who founded the Centro Escolar University. The oldest institution founded by women was the Sta. Catalina College in 1706. Also, one of the leading socialites of that time had her contribution to Philippine tertiary education, and she was Doña Victoria Lopez de Araneta y Ledesma. In this paper, her life and educational career will be discussed. 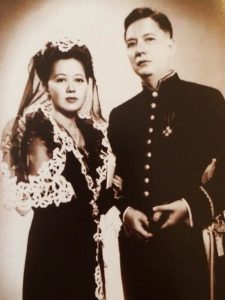 Providing the biographical background, Victoria came from the sugar barons of Iloilo and Negros, the Lopezes and Ledesmas, respectively. She was born in 1907. She is the wife of a nationalist economist and a constitutionalist, Don Salvador Araneta y Zaragoza and they married in 1927. As husband and wife, they have the same advocacy and they are doing it in their own ways. The oldest non-government organization (NGO), the National Economic Protectionism Association (NEPA), was established in 1934, with Salvador as one of its incorporators. Victoria held events and fundraisings for NEPA by establishing a women’s chapter; while her husband was busy debating on economic nationalism at the Constitutional Convention’s hall. The White Cross Orphanage was also the fruit of their joint endeavor.

Aside from an advocate, Victoria is also a businessperson and at the same time, an educator. Her career in education intersects with her business life. She had been a partner of Salvador in other Araneta-family holdings, including the two pioneering institutions that they have established, namely, the Araneta Institute of Agriculture and Far Eastern Aeronautics School.

Discussing first the FEATI or Far Eastern Aeronautics School, it was first known as the INAEC or Iloilo-Negros Air Express Company, established in 1934 by the Lopez family, cousins of Victoria. In 1946, it has been revived and renamed Far Eastern Air Transport Inc. The establishment of the Aeronautics School was proposed by Salvador in an official meeting of the company, which was approved and it was established. Despite the fact that the FEATI lost the competition with its rival, the Soriano-owned Philippine Air Taxi Company, later renamed Philippine Airlines, the new campus was kept by Salvador and Victoria.

Victoria took over the helm of FEATI Tech’s Presidency when Salvador joined the Cabinet of Pres. Quirino. Her Presidency is the longest in the University’s history, from 1950 up to 1986, spanning 36 years.

Jumping on the Araneta Institute of Agriculture, it was the brainchild of Vicente, Salvador’s brother, to establish a private agricultural school in the country. It was materialized in 1946, with Victoria, Salvador and his brothers incorporated the AIA at Hacarin Farm at San Jose del Monte, Bulacan. Two years later, at the height of battle with the Huks at Central Luzon, they relocated at Victoneta Park. The new place was bought by Victoria and Salvador while the former was busy working at FEATI as Treasurer. This was referred as the “Second Victoneta,” with the first one, destroyed by the war, located at present-day Princeville Condominium at S. Laurel St., near Shaw Blvd.

In 1954, when her brother-in-law Vicente resigned as the President of the AIA, she took over the position. Her stint as the President of AIA ended in 1956 when Salvador resigned from the Cabinet of Pres. Magsaysay and took over the leadership of the institution. One year later, the AIA became the Araneta University Foundation (AUF), and she continued her duties as the Mother of now-AUF.

As an educator, Victoria spearheaded the expansion of both FEATI and Araneta University. The expansions are both physical, wherein buildings and facilities were improved; and corporate. The AIA Industries, which produces agricultural products was established in 1950 and Victoria helped it progress. In 1960, the FEATI Industries that created appliances was established. Also, in 1961, the FEATI Bank and Trust Company was established. These three companies were created to allow the students to showcase their talents and to have a market for the local inventions.

Despite juggling her time as a businesswoman and a President of the University, she never failed to grace every event in the campus, from the first day up to the graduation day yearly.

Martial Law then came, and Victoria, with her now oppositionist delegate husband, was in California, and upon its declaration, they did not return. Instead, they went to Canada and lived there. During these times, Victoria manages FEATI from afar, assisted by her daughters. From 1973-1986, diplomas and other documents had to be shipped to her home in Vancouver in order to be signed by her personally. She ended her career in FEATI in 1986 due to old age, and in 1988, she succumbed to breast cancer.

In the present, the FEATI University and now De La Salle-Araneta University are still standing, both are fruits of labor by Victoria and her husband, Salvador. Her legacy is much remembered in FEATI, with her birthday, March 4, as the Founder’s Day. Aside from her five daughters, she also raised thousands of other young people in the duration of her career.

1 This is a condensed version of the conference paper that was read at the Philippine Historical Association 2018 Annual Conference at the GSIS Museo ng Sining, Pasay City, Metro Manila. The researcher is still conducting further research regarding the topic.